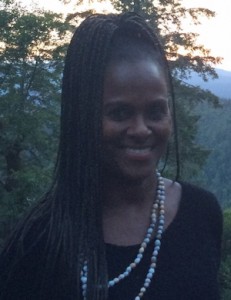 Gita Devi, Founder of Ayurveda Ananda, is a Clinical Ayurvedic Specialist, a graduate from the California College of Ayurveda.  She is also a Pancha Karma Specialist (PKS). Gita Devi has completed both the Sivananda Yoga Teachers Training and Advanced Yoga Teachers Training and has integrated her yoga knowledge with her Ayurveda practice.  She has been practicing and teaching Ayurveda and Yoga for the past 15 years and has focused on the integration of Ayurveda and Yoga since then.
Gita Devi is also a Master Reiki Teacher and ElectroMagnetic Balancing Technique teacher and practitioner (EMF). She holds a Bachelors Degree in Business Management (BA).

Gita Devi began her Ayurvedic studies in Kerala, India 2000.  She later traveled to the US where she continued her studies with the California College of Ayurveda.  She graduated as a Clinical Ayurvedic Specialist in 2005.  In that same year she opened a successful Ayurveda practice in San Francisco, called the Ayurveda Rejuvenation Center at the Sivananda Yoga Center.
Gita Devi resides in Northern California, where she runs her Ayurveda practice.
She regularly conducts Ayurveda lectures and consultations at the Sivananda Yoga Ashram in Grass Valley, CA.

What People Are Saying…

“Upon meeting Ms Gita Devi, I felt an immediate connection to her bright and wonderful spirit. Undeniable is Gita’s enthusiasm and passion for life. She is a shining light, with an irresistible charisma, and compelling personality….Gita’s empathy for her clients and her vast breadth of experience, culminate to create heart-centered and practical healing for all whom she serves.” — Jef A.

I have known Gita For about 10 years. Upon meeting her I felt an instant connection. I now call her my “Spirit Mama.” She has brought me wonderful insights and healing. There have been many serendipitous synchronicities between us, all confirmation from the universe that we are in alignment. We first met when I sought ayurvedic treatment after having 2 miscarriages. Within 6 months of seeing her I became pregnant. She told me I was meant to deal with a lot of masculine energy in this lifet… END_OF_DOCUMENT_TOKEN_TO_BE_REPLACED

Working with Gita has been transformational and a true delight. I dropped ten pounds in 2 months and let go of some deeply ingrained habits that weren’t serving me. I learned about my Ayurvedic constitution, ate well and loved the food, deepened my yoga and meditation practice, and thoroughly enjoyed the bliss treatments I received weekly. We are so fortunate to have Gita Devi here in Mendocino County! Cheryl J.

This is an amazingly whole system experience!! My body, mind, emotional body, and spirit are cleansed and nourished!! I’m looking forward to my next treatment!! Thank you, Gita, for your amazingly wise ways!! Mimi Cezanne S.

Thank You for Your Amazingly Wise Ways